Which Tarot Deck Should I Use? (Tarot Deck Part 2)

Home Insights Which Tarot Deck Should I Use? (Tarot Deck Part 2)
NextPrevious

Which Tarot Deck Should I Use? (Tarot Deck Part 2)

What once began as playing cards in the late 14th century, tarot cards evolved and were later used as a divination tool by the late 16th century. In 1791, the first tarot deck was created by Jean-Baptiste Alliette solely for divination use. The deck, like all the tarot cards used by the 18th century, had images which featured symbolism and patterns that are recognised worldwide due to their universal meaning.

Whether you are someone that uses tarot cards to enhance your divination abilities, or if you simply are fond of collecting tarot cards, there are many decks to choose from. Though each embodies different themes and are telling of the period from which they were created, all the tarot cards feature patterns and symbols that still reflect universal themes making them significant tools in divination especially in psychic readings. Here are more tarot card decks, each with their unique themes that make tarot card reading more interesting to practitioners and more relatable to non-practitioners.

If you haven’t found your choice from our first tarot deck collection, or if you want something different that would make tarot card reading more relatable especially in terms of reading the images and seeing the patterns and the symbols, here are more decks to choose from: 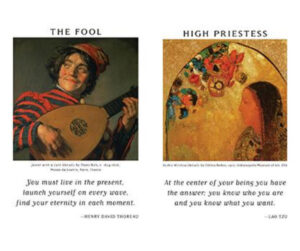 As the name suggests, the Art of Life Tarot Deck by Charlene Livingstone features famous artworks that denote ordinary life as seen by great artists like Dega, Da Vinci and Van Gogh. With photos of famous artworks, each card also displays inspirational, philosophical and spiritual quotations from literary masters, inviting one to reflect on the photo and text of the drawn cards. What’s special about this Art of Life tarot deck is that it is oversized, allowing ample space for the beautiful artworks as well as the insightful quotations. 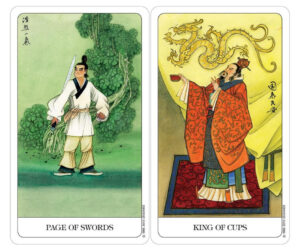 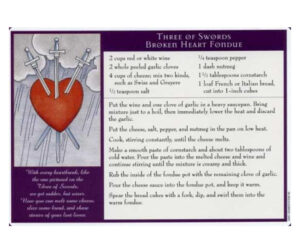 The Epicurean Tarot Recipe Cards Tarot Deck is literally food for the soul! Corinne Kenner gives a different take to tarot card reading by featuring recipes suited for each card of the Universal Waite tarot. Aside from having a complete list of ingredients and instructions on how to cook the dish, what’s different from Kenner’s tarot deck is its presentation. Oversized and made of glossy plastic, this deck is considerably made for kitchen use especially if you are reflecting on the tarot and cooking for recreation. The cards serve not only to spiritually satisfy us but also to physically appease our hunger.

Lisa Hunter’s Ghosts & Spirits Tarot Card Deck feature ethereal beings from lore and legends around the world. The tarot cards depict benevolent and frightening beings to show the contrast between life and death, especially how these affect human experiences. Each tarot card also carry messages from the ghost or the spirit depicted in the card. 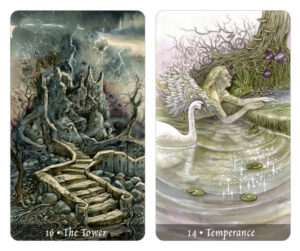 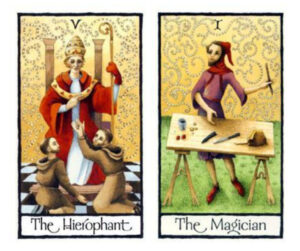 Inspired by Sir Geoffrey Luttrell’s medieval English manuscript entitled Luttrell Psalter, Maggie Kneen created the Old English Tarot Card Deck which features ordinary life during the period. The deck features detailed illustrations showing the different hierarchies in their ordinary setting during the era. The cards give a glimpse of history especially life in court and in church.

Inspired by Thailand’s history, culture, literature and architecture, Sungkom Horharin created the Royal Thai Tarot Card Deck together with Wasan Kriengkomol and Verasak Sodsri. A Thai native, Sungkom Horharin claims to be one of the first tarot card fortune-tellers in the country and wants a deck that would represent his fatherland. 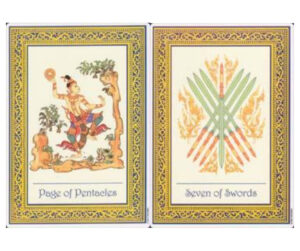 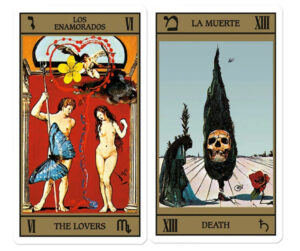 The Salvador Dali’s Tarot Card Deck, named after the artist himself, took about a decade to be completed. Dali started making the tarot cards in the early 1970s for the James Bond movie, Live and Let Die. But since Dali had high fees, the cards didn’t appear in the movie. Dali instead continued working on it until the deck was completed and published in 1984 by Taschen. Known for being a surrealist, Dali’s tarot card embodies surrealist characteristics by not only being oversized but by taking popular figures such as himself, his wife and Julius Caesar and using them as the subject in his depiction of the King, the Fool, the Magician and so on.

The Vampire Tarot Card Deck by French artist Natalie Hertz depicts seductive vampires and other undead beings to lure the reader to the underworld. The Gothic-themed evocative artwork is meant to explore the mysteries and the shadows of the underworld and how our subconscious plays into it. The cards are made from unique paper and fabric, and the artist makes use of metallic ink to highlight the details and give a more alluring tone to the cards. 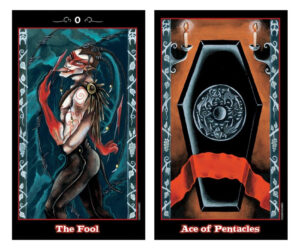 At Psychic Truth, we have highly intuitive psychics with a deep understanding and a rich experience of the tarot cards. They have their preferences when it comes to what tarot cards help enhance their abilities or what specific deck best speaks to them depending on their current circumstance.

Together with their other natural psychic abilities, our psychic readers draw on the Tarot Cards and Angel Cards to present the picture, the journey ahead, with signposts along the way.