What Are The Different Tarot Card Decks?

What Are The Different Tarot Card Decks?

Tarot Cards originated in late 14th century France where artists created playing cards for wealthy families to use in their parlour games. It was in the late 16th century that Tarot Cards were starting to be seen as tools of divination. By the 18th century, people began to assign a universal meaning behind the symbolism and the patterns on the Tarot Cards. A French occultist by the name of Jean-Baptiste Alliette was the first to release a Tarot Card Deck in 1791 for the sole purpose of divination.

Tarot Card Reading is one of the most popular psychic divination practices done all over the world. There are many types of Tarot Card Decks, but all have 78 cards used as tools for spiritual divination. Each deck has 22 Major Arcana cards and 56 Minor Arcana cards that represent different characteristics.

Though there are different Tarot Card Decks designed by different artists and with varying images, the underlying symbolism these Tarot Cards remain the same. The pictures on the cards are rich in meaning and the pattern they form in a reading can help the reader to gain insight into someone’s life.

The variety of the Tarot Card Decks were designed not only to be beautiful but also to be inspirational and help the readers connect with their intuitive abilities as well as their Spirit Guides. Whether it’s a message from the Angels or otherworldly beings, the Tarot Cards serve as tools for divination and require great practice and deep understanding.

The Angel Oracle Tarot Deck is one of the most popular Tarot Cards for beginners. The deck is divided into three groups: form, creation, and paradise and they feature Angel imagery with soulful symbols that can help Tarot Card Readers connect with their intuition and seek guidance from the Angels.

As in the name, the Deviant Moon Tarot Deck features moonlit artworks created by Patrick Valenza in 2015. Inspired by childhood dreams, the cards feature mood-faced characters and surreal images designed to illuminate the subconscious and reflect different themes though detailed imagery. 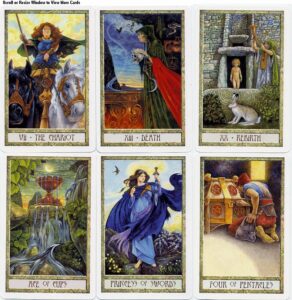 The DruidCraft Tarot Card Deck is commonly used by Tarot Card Readers who wish to connect to the natural world. Created by Philip and Stephanie Carr-GommIt, well-known Druids, the deck shares the old numbers theory as well as features earthly images, especially the seasons. It is based on Western as well as Wicca and Druid pagan traditions.

Legacy of the Divine

The Legacy of the Divine Tarot Card Deck gives the cards a divine look by enhancing the images and the colours to help the Tarot Readers connect with their insights. Designed by well-known Tarot artist Ciro Marchetti, the Legacy of the Divine Tarot Deck gives a modern outlook to the images and the names of traditional Tarot Cards.

Created by Giovanni Caselli and Liz Greene and published in 2009, the New Mythic Tarot Card Deck is a rework of the 1986 Mythic Tarot Card and features classic themes as well as Gods & Goddesses and Heroes & Heroines from the Ancient Greeks. The new illustrations create rich imagery from the classical world which helps Tarot Card Readers gain insights from the character archetypes from the cards, especially those seeking wisdom and personal growth.

The Pagans Otherworld Tarot Card Deck is considered one of the most beautiful Tarot Deck perhaps because it was meticulously hand-painted in oil by Linnea Gits and with lettering by Peter Dunham. This deck introduces a 23rd Higher Arcana card, “The Seeker” and five “Luna Cards” which reflects Celtic mysticism and the feel of Renaissance paintings. The Universal Marseille Tarot Deck is based from the 1751 Marseille Tarot Swiss playing card deck created by Claude Burdel. The Universal Deck features restored characters and images of the 18th century with elements of ancient texts, offering rich symbolism and a glimpse to the old times.

The Wild Unknown Tarot Card Deck is considered among the most beautiful of Tarot Cards. Designed by Kim Krans, the cards use rainbow colours to illustrate over black and white backgrounds. Instead of illustrations of humans, the Tarot Cards feature images of animals and nature and reflect many symbolisms. The Zerner-Farber Tarot Card Deck features slightly whimsical yet enchanting images of hearts, pentacles, wands, and swords, and with colours from Amy Zerner’s award-winning fabric tapestries. This deck is usually preferred by those new to the practice of Tarot Card Reading especially since Amy Zerner and Monte Farber designed the deck after their Enchanted Tarot Card Deck and with beginners in mind.

At Psychic Truth, we have highly intuitive psychics with a deep understanding of the Tarot Cards and Angel Cards, and rich in experience. Our psychics have their own preferences and they use what best speaks to them depending on their current circumstance. Quite often, as with crystals, it’s the tarot deck that choses the psychic, not the psychic who choses the tarot.

Together with their other natural psychic abilities, our psychic readers draw on the Tarot Cards and Angel Cards to present the picture, the journey ahead, with sign posts along the way.